Repeats? What the heck are Repeats?

Part of your training will probably be to do "repeats." These are when you run a relatively short distance - say, 800m, 1000m, etc. - several times, with some rest in between. In cross-country, this is usually done on a cross-country-ish course, as opposed to interval training on a running track. Because it is done on trails or similar terrain, the distances might not be exact.

This kind of workout is very challenging. You will get the most out of this workout if you can run each of the repeats at about the same time. However, new runners can almost never do this without lots of practice. You will usually start out too fast on the first one, and will struggle to match that first time. On the other hand, you don't want to go too easy on the first 3 of a 4x800 workout just so you can blast the final one - you won't get much benefit by doing that.

What I recommend to runners who are new to a repeats workout is to run the first one briskly, but staying relaxed. Since you're fresh, your time will probably be pretty good. Then, try to run the next-to-last one as hard as you can. This approach will probably result in repeats that are pretty close in time to one another. The ones after #1 will be relatively easy to match that first time because you just ran it. By the time you get to the next-to-last one, you will be pretty tired, so running it your hardest will not result in an overly fast time. Then, everyone can run one final repeat pretty hard, so hang in there on that last one.

Don't worry if you don't master this skill right away - it's like any other skill that takes practice. I always enjoy doing these kinds of workouts because, even though you shouldn't be racing, it seems like you are. Also, I just like to run fast.

I know, I know, you neeeeeed to Facebook your friends for three hours every night. Well, actually, you don't. Yes, it is important to have social relationships, but you really don't need to be texting or chatting until the wee hours.

Cross-country is very, very, VERY demanding on your body. That means you really need to get enough rest every single night. Of course, you will also have homework and maybe a piano lesson or something, too.

Research shows (yes, I'll find the published study I'm thinking of when I have a chance) that you eventually have to catch up on your sleep. That's YOUR sleep, which may be different than someone else's. Let's say that YOUR body needs 9 hours of sleep a night. If you only get 8 hours of sleep on Sunday, Monday, Tuesday, Wednesday, and Thursday nights, that means you need an extra 5 hours on Friday night to catch up. If you don't catch up over the weekend (which you might not be able to do), you will fall further and further behind.

Falling behind on your sleep can have very negative consequences on the really important stuff, like your mood and your schoolwork. It can even make it easier for you to catch colds. But it will also significantly affect your performance in cross-country.

It's not that hard to figure out how much sleep you need - just track how many hours you get a night and how you feel the next day (Hint: you will probably need more during XC season than at other times). I am willing to bet you are probably smart enough to come up with a number of hours for yourself. Once you do, stick to that. Sure, you may have an occasional night or two that you don't get enough, but do your best to not fall behind.
Posted by Marty Beene at 8:15 PM No comments:

Yes, in cross-country, we do indeed run in the rain! 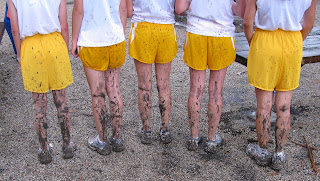 Posted by Marty Beene at 8:24 AM No comments:

I'm going to write a lot about racing in upcoming posts - what you should do before a race and during a race - but what about after? Of course, there's the cool-down jog and stretching, but you should always take time to think about your race. What went well? What didn't go well? Was there anything that surprised you?

Part of thinking about the race is the course itself. Hopefully you got a chance to run all or part of it before the race, but now that you raced on it, you can start to develop strategies for when you run it next time, or at least when you run a similar course next time.

When did you pass people on the course? On the uphills? On the downhills? When did people pass you? More importantly, when you passed people, did you finish the race ahead of them? Or did they pass you back later? Same for when people passed you.

Lots to learn from every race - I find that I use things I learned 25 years ago sometimes, so be sure to put all of this info in the back of your mind for later....
Posted by Marty Beene at 6:46 AM No comments:

Cross-Country IS a Team Sport!

"I keep hearing about cross-country being a team sport. I thought everyone just went out and raced, and whoever is the fastest is the winner."

In a sense, this is true: everyone does go out and race, and there is a winner. But cross-country really is a team sport, and here's how it works....

Each runner's place is recorded at the finish, and the first five runners for each team comprise the scoring members of that team. The place numbers for those five runners are added up, and the team with the lowest score wins.

Here's an example: Say you have three teams in a meet, East, West, and Central High Schools. Here's how the finish looks...
1. West #1

Notice that each team had seven runners in the race, not just five. That's the usual number of runners, even though the 6th and 7th place runners don't count in the scoring. Those runners are known as "displacers" because finishing where they do pushes runners behind them to higher numbered places, increasing that team's score.

What would have happened if East High's last two guys had come in 15th and 16th instead of 16th and 19th? East's score would have been the same: 4+5+8+9+12=38. But Central's would have been 2+3+6+11+17=39, which means that East High would have won by 1 point instead of Central winning by 1 point. And all because of runners who didn't even "count" in the scoring! This illustrates the unique characteristic of cross-country that all members of the team actually are important.
There are other considerations, too.
Another thing to understand about the scoring system is that the time it takes to complete the course is completely irrelevant to the team results. The only thing that matters is finishing ahead of runners from other teams. This is especially important to remember when a runner has a sub-par performance in a race - there is an urge to slow down when you know you're not having a great day, but you have to remember that finishing ahead of one or two or three other runners might make the difference of your team making it onto the podium or not. Runners are always timed, but it's more for curiosity's sake than for anything relevant to the competition.
Posted by Marty Beene at 7:07 AM No comments:

I thought I would start a blog oriented toward newcomers to the great sport of cross-country. I'm the coach of the frosh-soph boys cross-country team at Alameda High School in Alameda, California. It's my second year as one of the assistant coaches, and the head coach and other assistant want to focus on the more experienced runners. So that means I get to introduce lots of guys to the sport.

My plan for this blog is to take you through all of the various elements of the sport, eventually. I expect that topics will pop into my head from time to time, perhaps from something that happens at our practices or races. Hopefully people will read what I write and ask questions ("What the heck did you mean by that?!") or make comments ("You are out of your head on that one...."). I'll occasionally add some photos, and if you have any good ones, you can send them to me and maybe I'll post them.

Marty
Posted by Marty Beene at 12:10 PM No comments: