Don't Step on the Banana Slugs! 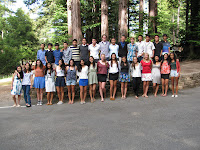 Many high school cross-country programs offer a "running camp" during the summer. Last month, I helped take 28 student-athletes to a camp. It was a fantastic experience for everyone!

There were several purposes of the camp. The obvious one was to be able to get some focused training time, away from whatever obligations everyone has at home. Another major purpose was team bonding, which is more than just getting to know each other better. Other purposes included learning about our upcoming season and mental training techniques such as visualization. The camp was open to anyone, whether they were on the team or not.

We left town on a Sunday morning for the 1½-hour drive to the camp. The camp was located in a spectacularly beautiful part of the San Francisco Bay Area between Palo Alto and the Pacific Ocean. There was no cell phone service in the area of the camp. No one seemed to mind.

What did we do at the camp? Our typical schedule was to wake up at 6 AM and go running at 6:30. What?! 6 AM?! Yes, that's pretty early for teenagers to get up during the summer, but you know what? There wasn't a single time in the five days we were there when we had to drag someone out of bed who had overslept. Everyone was very motivated to get up and run. Why? The early morning runs were some of the best times of the camp. The forest was just waking up, the fog was collecting in the redwood trees and dripping down onto the ground, and - best of all - the early morning was the best time of the day to find banana slugs!

After breakfast, there was some free time, and then we had a meeting at 10. We did several different things at these meetings. For one of them, I walked everyone through a simple visualization exercise. I wrote about visualization in another post last season, and this was a chance for everyone to try it in real time.

Once the meeting was over, there was some more free time before lunch. After lunch, everyone tried to digest their food quickly because the main workout of the day was at 2:30. At this workout, the most advanced runners would run all the way to the end of the trail that we ran on - the round-trip distance was ten miles! The less advanced runners started the week running for 40 minutes, and then worked their way up to 60 minutes by the end of the camp. 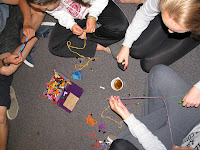 After the tough workout of the day, there was more free time, which was used to swim in the camp's beautiful pool a few times. Other runners enjoyed playing volleyball on the sand court or ping pong or making friendship bracelets or playing the guitar and singing. After dinner, we had another meeting, where we did things like going over what our competition was going to be like in the upcoming season. We also had some "circle time" at a couple of the meetings, where everyone shared their experiences of a good or bad race or something funny that happened to them in a race. During one of the evening meetings, each person got up in front of everyone and announced what their goals are for the upcoming season. Each person also had the option of saying how they feel about running, about being on the team, etc., which several people did.

Finally, the day ended with some kind of social activity like group games or a campfire with s'mores. One night, there was a talent show, which was very impressive and, of course, fun. It was lights out at 11 PM (although it's rumored that some of the runners stayed up talking a little later than that).

At the end of the camp, some of the runners made a chart on one of the white boards in the meeting room that tallied up all of the miles everyone ran. Many of the runners were amazed at both their own accomplishments and those of their teammates. Everyone left the camp with a huge confidence boost because of all of their hard work, not to mention having made new friends or strengthening existing friendships with their teammates. Most importantly, the camp served as one more experience that made everyone want to continue running.
Posted by Marty Beene at 8:44 AM