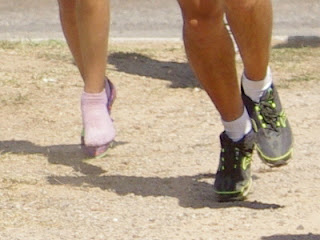 On the team I coach, we've had a rash of shoe loss this season. One runner lost one of his shoes during two different races, and another runner had it happen once. In each case, the shoe either came completely off on its own, or the runner concluded that's what would end up happening anyway, so kicked it off.

Sometimes, a poorly-tied shoe is the culprit. But in the most recent case, a runner from behind accidentally stepped on the heel of my guy's shoe, so better shoe-tying would not have helped. He kicked it off to the side of the course, then kept running. For over two more miles. His time was remarkably good, as he finished within just a few seconds of teammates who had routinely beaten him throughout the season by a half-minute or more.

This got me thinking.

I would guess about 5 seconds, maybe 10.

So, knowing that, if it's late in the race, maybe it would still make sense to just leave it off and keep running. But if it was earlier in the race - say, with more than one mile still to go - it might be more productive to stop and put it back on. You could probably get those 5-10 seconds back by having both shoes on, maybe more.

The point of all this is that you should think about what you would do if it happens to you. That way, if it does, you'll be prepared and have some idea what to do.
Posted by Marty Beene at 11:40 AM